An Overview of Antibiotics

When we’re suffering from a bacterial infection, a trip to the doctors to be prescribed antibiotics is commonplace. However, there are a wide range of antibiotics available, and they vary both in their usage and their mechanism of action. This graphic summarises the major classes, and also gives a brief insight into the manner in which they combat bacterial infections; we’ll also consider each of the groups in turn, as well as bacterial resistance to each. 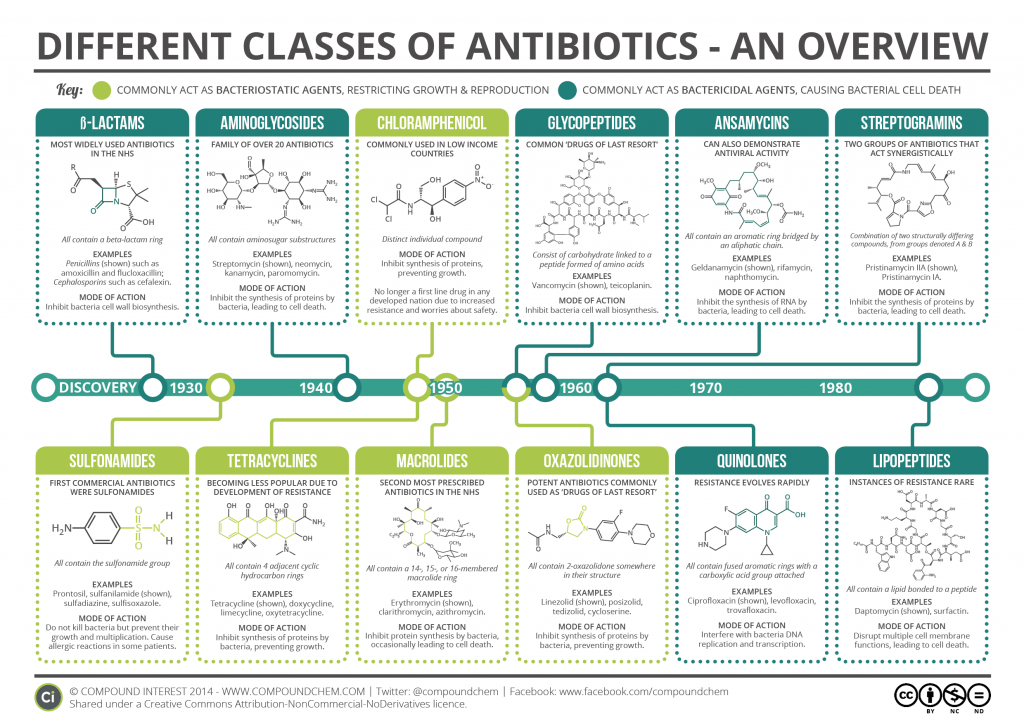 Prontosil, a sulfonamide, was the first commercially available antibiotic, developed in 1932. In the present day, sulfonamides are rarely used, partially due to the development of bacterial resistance, but also due to concern about unwanted effects such as damage to the liver of patients.

Aminoglycosides inhibit the synthesis of proteins in bacteria, eventually leading to cell death. In the treatment of tuberculosis, streptomycin was the first drug found to be effective; however, due to issues with toxicity of aminoglycosides, their present day use is limited.

Tetracyclines are broad-spectrum antibiotics, active against both Gram-positive and Gram-negative bacteria. Their use is decreasing to increasing instances of bacterial resistance; however, they still find use in treatment of acne, urinary tract, and respiratory tract infections, as well as chlamydia infections.

Another broad-spectrum antibiotic, chloramphenicol also acts by inhibiting protein synthesis, and thus growth and reproduction of bacteria. Due to the possibility of serious toxic effects, in developed countries it is generally only used in cases where infections are deemed to be life-threatening, although it is a much more common antibiotic in developing countries due to its low cost and availability.

Macrolides' effectiveness is marginally broader than that of penicillins, and they have been shown to be effective against several species of bacteria that penicillins are not. Whilst some bacterial species have developed resistance to macrolides, they are still the second most commonly prescribed antibiotics in the NHS, with erythromycin being the most commonly prescribed in the class.

Glycopeptides include the drug vancomycin – commonly used as a ‘drug of last resort’, when other antibiotics have failed. There are strict guidelines on the circumstances in which vancomycin can be used to treat infections, in order to delay the development of resistance. The bacteria against which glycopeptides are active are otherwise somewhat limited, and in most they inhibit growth and reproduction rather than killing bacteria directly.

Oxazolidinones are active against Gram-positive bacteria, and act by inhibiting protein synthesis, and hence growth and reproduction. Linezolid, approved for use in 2000, was the first marketed antibiotic in the class, and resistance seems to be developing relatively slowly since its introduction.

Quinolones are widely used for urinary tract infections, as well as other hospital-acquired infections where resistance to older classes of antibiotics is suspected. Resistance to quinolones can be particularly rapid in its development; in the US, they were the most commonly prescribed antibiotics in 2002, and their prescription for unrecommended conditions or viral infections is also thought to be a significant contributor to the development of resistance.

Streptogramins are unusual in that they are usually administered as a combination of two antibiotic drugs from the different groups within the class; combined they have a synergistic effect and are capable of directly killing bacteria cells. They are often used to treat resistant infections, although resistance to the streptogramins themselves has also developed.

Discovered in 1987, lipopeptides are the most recent class of antibiotics. Daptomycin is the most commonly used member of the class; it has a unique mechanism of action, disrupting several aspects of cell membrane function in bacteria. This unique mechanism of action also seems to be advantageous in that, currently, incidences of resistance to the drug seem to be rare – though they have been reported.

Andy Brunning is a chemistry teacher creating graphics looking at the chemistry and chemical reactions we come across on a day-to-day basis. This was originally posted in a longer version on Compound Interest - read the original post for even more info and the full graphic.

Watch Sprint Workshop 2: Learn how to attract investment to fund product development and scale your company

Lurching from one pandemic to another? From the frontlines of antibiotic resistance during Covid-19

Stories from the frontlines of antimicrobial resistance during Covid-19

To coincide with the second Longitude Prize Sprint workshop focused on regulation, we spoke to investment expert David Gill, Managing Director, St. Johns Innovation Centre to capture his advice to innovators working in this space.

This 10 minute film highlights the problem of superbugs across the globe, but through the eyes of India. We interviewed doctors, patients, researchers and teams working to address antibiotic resistance with rapid diagnostic tests.

How is Europe faring in the fight against antibiotic resistance? We show the big picture using the latest available data from the European Centre for Disease Prevention and Control.

We examine a cross-section of the bacteria that are causing problems to patients and doctors around the globe because of their resistance to antibiotics.

What does a colourful chip have to do with antibiotics?

In this Q&A and video, Team Prismatix shows us their multifaceted test to determine what bacteria is causing an infection and which antibiotics will be the most effective.
Banner link:
Read now

Our top 5 tips for playing Superbugs: The game

Our top tips for getting a better score in our antibiotic resistance-based game, Superbugs! Can you beat the bugs?
Banner link:
Listen and learn